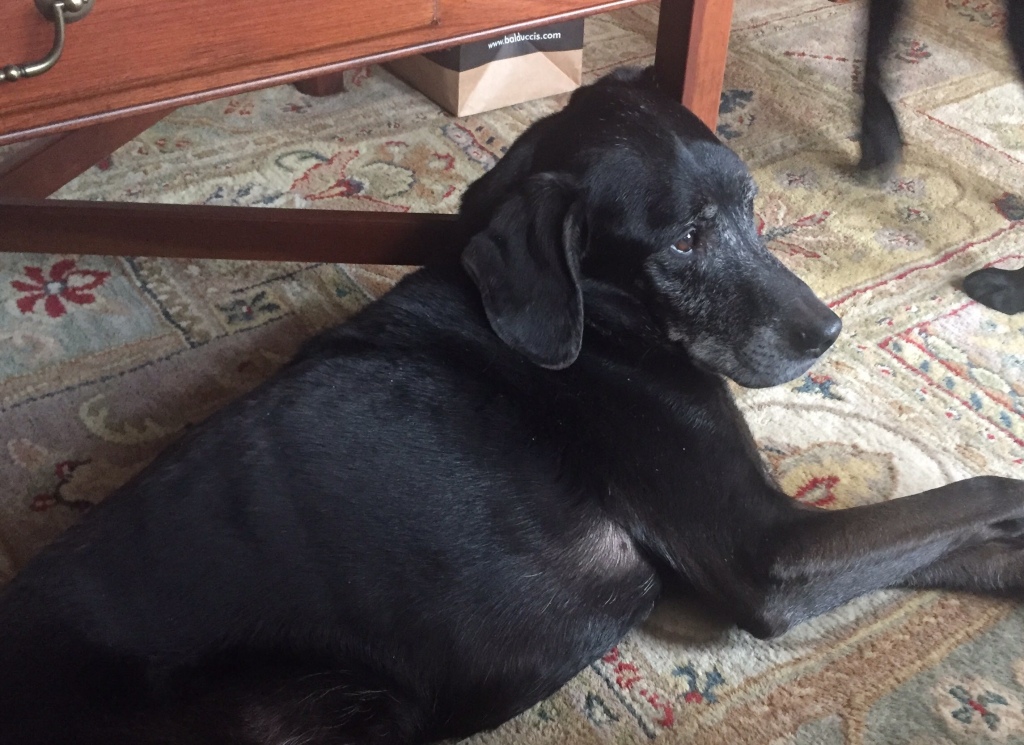 This is the second installment of the two-volume biography of  the dog with whom I am permitted to share a house.  The life of Boo.

Boo, it turned out, was a born hiker.  In the Adirondacks, he found his natural element: long, steep trails, wide-open spaces, wildlife to chase, and swampy puddles through which to wade.  Heaven.  Humans in the high peaks region have taken to tracking the peaks they’ve ascended, the goal being to reach the top of all 46 high peaks.  Boo cared little for these feats.  In fact, on a typical hike he would probably go up and down the mountain three or four times, with zero concern for how many checks he received.  His only challenge was keeping track of the humans.  On one occasion, on a small mountain called Rattlesnake, Boo had ventured close to the top, hundreds of yards beyond his snail-like humans.  The humans, reaching a trail junction, called for the wayward puppy.  Hearing their voices, he hurried down the mountain, not realizing that he must have passed them.  They, assuming he was up ahead, proceeded up the mountain, calling ever more frantically.  Where had he gone?  Had he fallen off a ledge?  Had he encountered a bear?  Was he hopelessly lost?  Wondering all of these things, the humans reached nearly the top before venturing back toward the junction.

Meanwhile, on another part of the mountain, Boo wondered, “Where have they gone?  Are they still at the trailhead?  Just how slow are they?  Are they lost?  Are they taking a nap? Wondering all these things, Boo ventured toward the bottom of the mountain and then started back up the trail.

Somewhere around the original junction, the two sets of wondering wanderers reunited.  The humans, oddly hysterical, clamped a leash on Boo’s collar, hardly the reward he expected for rescuing them again.  New Nickname:  Mis(ter) Understood

In 2008, Boo is gripped by the presidential election that captured the nation’s imagination.  It’s not the message of hope, nor is it the youthfulness of the Democratic candidate that seizes Boo’s attention.  He finds himself obsessed with the polls (even more than telephone poles) and later the election returns.  The humans are puzzled by the attraction, wondering aloud if it could be something as superficial as the color of the candidate’s skin.  Boo, after all has black fur, and has always been suspicious of light-furred retrievers.  “God, I hate those entitled Goldens,” he has been heard to grumble.  It turns out this has nothing to do with Boo’s political or social leanings.  Sadly, it also turns out his allegiance stemmed from a misunderstanding.  As mentioned before, Boo’s decoding is not quite at grade level, and he was disappointed to learn, AFTER the election, that the President-elect’s name was Barack, not Bark, and he was in fact, not canine, but rather yet another human.  Disgusted and a bit chagrined, Boo has since washed his paws of the American political scene.

Sarah decided in 2010 that Boo needed a companion.  The family agreed, without consulting Boo.  When the tiny maniac arrived on the scene, Boo assumed the role of tutor, patiently explaining  that we do not use the kitchen as a bathroom, crates are for puppies, and there’s a proper way for a male dog to relieve himself.   The rugrat caught on to many routines, but was woefully slow to learn the leg lift.  This caused a great deal of embarrassment on walks, but Boo tolerated his attempts.  New Nickname:  Sensei

Adventures on the trail now involved the wily veteran and his faithful rookie sidekick.  On a mountain known as Jay, the boys decided that the trail was not wide enough, and they headed off on a bushwhacking expedition.  Sometimes they followed interesting scents, while at other times they chased noises or motions.  In one particular case, it was the latter that led them astray.  A flash of fur toward the left of the trail sent big brother Boo off in a flash, with McGee trailing behind, wondering what big brother had seen.  Boo was sure that it was a squirrel and that it must be chased with haste.  The duo was in hot pursuit, when, surprisingly, they caught up to it.

This was not your ordinary squirrel, as they soon found out.  Boo, as a rule, only enjoyed running after things that were actually running away from him.  Any creature with the nerve to face him, gave him pause.  In that event, he generally tried to pretend that he didn’t notice the creature.  In this case, however, Boo had a sidekick.  He suggested that Tonto investigate first.  McGee dutifully raced toward the “squirrel,” barking lustily.  As he reached biting distance, however, he made a shocking discovery, which he announced in horrified yelps.  “It’s sharp, Boo!  It’s a really sharp squirrel.”

Boo, embarrassed by McGee’s display, charged in to see for himself.  The “squirrel” turned and whacked Boo upside the head with his tail.  Boo felt stabbing pain in his muzzle, yelped, and reluctantly admitted that these Adirondack squirrels were indeed sharp.  Humbled and pained, the two hunters retreated to their humans.  Seeing them, the humans gasped and said something along the lines of, “Oh my gosh, they got in a fight with a poke-you-pine.”

“Yeah, and they lost.”  The humans attempted to help.  The male pulled out some instrument of torture that he referred to as a Leatherman and attempted to extract the painful pokers.  Both dogs protested mightily and had to be transported to a nearby veterinarian.  For Boo, a new understanding:  Adirondack squirrels deserve respect and personal space.  New nickname:  Knucklehead.

Through the years, Boo develops disdain for kibble, the food of mere dogs.  By comparison to the rugrat, he becomes convinced that he may have some superior breeding.  Eating and napping become higher priorities, and his expectations rise.  In part, this stems from the humans’ lack of discipline or limits.  Boo finds that he has access to every piece of soft furniture besides the living room couch.  He routinely shifts napping spots, from soft mattresses in bedrooms to den and basement couches, often with an eye toward optimal sunbathing.  He turns up his snoot at mere dog beds, (clearly beneath him).  Similarly, by avoiding his food bowl in the morning and appearing lean and malnourished by evening, he finds that the humans bestow cutting boards, table scraps, and giblets at meal’s end.  Eventually, this becomes routine.  Though he would prefer the livers with a bit of sherry reduction, he suffers the rustic presentation of liver a la kibble.

One day, however, Boo wakes up in distress.  Lacking energy and feeling feverish, he flops on the floor with drawn-out groans.  When he can’t muster the strength to mount his favorite couch, his humans rush him to the vet.  He is about to become the world’s most expensive rescue dog.

It turns out he has a significant abscess on his liver, which will require surgery.  Given his fitness and vibrancy of two days prior, the humans cannot imagine declining the procedure.  Boo endures several days of pain, torture, and mind-altering medication.  He emerges without one-third of his liver and with an expensive regimen of liver-supporting medications.  He also emerges with a new appreciation for the finer things in life.  He learns that an exaggerated groan before reclining often tugs at the humans’ heartstrings.  He comes to expect meat drippings, bacon, and eggs as regular supplements to his dining experience.  Recently, the female human is overheard apologizing for overcooking his fried eggs.  Boo groans, but manages to force it down.  New nickname:  The Prince.

The author would like to acknowledge the help of Boo’s mouthpiece, the human named Nancy, who faithfully and creatively translates most of his noises, gestures, and facial expressions into intelligible English.