I took a trip to Seattle with my family over the February vacation.  I have a whole list of little moments that I thought might be slice worthy, but each day I stare at the list and think, “That isn’t really a slice, it’s a sliver.”  So, here is a collection of slivers that might sum to a slice.

Sliver One:  It’s drizzly when we arrive at the Hotel Sorrento, an elegant hotel in a beautiful part of the city.  The hotel would not normally be in our price range, but we had a wedding discount (which might have been revoked had I been permitted to give my toast). I needed to pick up a tux that I had rented back in the East but could conveniently procure in the West. Thank you Men’s Wearhouse.  I knew the address, and asked the person at the desk if it was in walking distance. “It’s walking distance on the way there, but probably not on the way back.” This struck me as a very odd comment, more like the kind you’d get in Maine, when the guy says, “Nope, can’t get there from here.”  I probed for more information.

She was right.  I had heard a lot of different things about Seattle, like that it rained about 8 days out of every 7, or that I simply MUST go to the fish market and have a fish thrown at me.   I had not been warned about the hills. Now, we’re kind of into hiking in my family, so it wasn’t really a big deal to do the walk, but the way down to the Men’s Wearhouse was a little like walking down a water slide at Disney, and I will say that as we trudged up in the other direction, I was a tad disappointed when, as luck would have it, we hit four consecutive “walk” signs before reaching the crest. A breather might have been nice.

Sliver Two:  We did make it to the aforementioned fish market, and we were duly impressed by the number and variety of people and the number and variety of sea creatures.  I did not have a fish thrown at me, nor did I witness a fish being thrown at anyone, but I did have the pleasure of having a monk fish leap at me from his icy resting spot.  This occurred while I was attempting to photograph said fish, and it led to great laughter and merriment for the people behind the counter who had rigged up the jumping fish. (See photo).  As a result of this  experience, we ventured to a safer zone and purchased what every fish lover must have when he visits the famous Pike Street Fish Market. I’m speaking, of course, of Tayberry Jam and Whiskey Caramel.  See? Not a story or a slice, but perhaps a sliver. 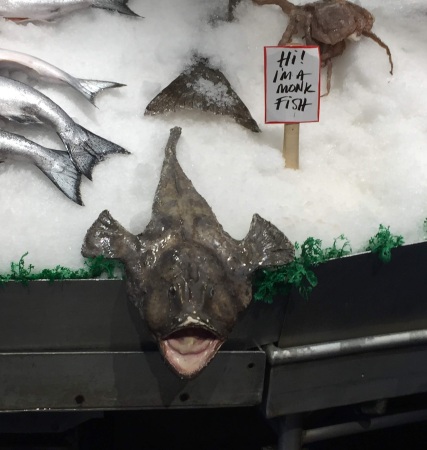 Sliver Three:  The people of Seattle like tall things.  They have these tall mountains all around them, and they have this tall structure called the Space Needle.  We decided to go up to the top to experience the view. The people of Seattle who like tall things, also like to make those tall things a little freaky.  Now, it’s not the Tower of Terror or anything, but the latest upgrade to the Space Needle will make you feel a little insecure. I guess people who are afraid of heights wouldn’t voluntarily venture to the top of the Space Needle, anyway, but if you don’t love heights, I might recommend that you skip the restaurant area just below the main observation deck. The recent renovations included the installation of a glass floor (or plexiglass…presumably something relatively sturdy). I don’t really mind heights, but I have to admit that a revolving glass floor that is 500 feet above the ground will make you think a bit about your steps. To help you feel a little less secure, the thoughtful designers have also created some glass (or plexiglass, presumably something relatively sturdy) benches that tilt down toward the edge of the platform so that as you sit back in them you get the pleasant sensation that you might just be falling off the back of the bench to the pavement 500 feel below.  The elevator down was nothing like the Tower of Terror, I’m happy to report.

Sliver Four:  We went to the library.  The librarian at my school dispenses lots of good travel and dining advice.  She has never steered me wrong, but when she advised me to visit the library in Seattle, I thought that perhaps this was some sort of library geek thing, like maybe she checks out the library (that’s a little library humor) in every town she visits.  I mean, I like books too, but I don’t think I need to see the stacks in every town. “No, no,” she assured me, “you really should see it. It’s remarkable.” I passed this advice along to my family, and on one of the cold rainy days, my wife agreed that perhaps a warm library might make a good destination. As it turns out this is not just a librarian’s hangout. From the outside, the building looks like it might be designed to look like randomly stacked books. On the inside it is modern-techno-comfy.  It’s amazing. We wandered through the spiral stacks to the reading room on the 10th floor and just sat and read. It’s so hospitable that some of Seattle’s homeless population take advantage of the reading rooms, but why wouldn’t you? I was there for 45 minutes before I understood the artwork that several people had stopped to admire, chuckle over, and photograph while we sat.  It was both art work and library artifact at the same time, a painting of a wall of card catalog drawers.  Very retro. I snapped a photo.  Perhaps I’m a library geek, too.

“Well,” as my mom likes to say at the end of a meal, “That’s all there is.” So, I’m hoping four slivers of Seattle equal one slice of life.

8 thoughts on “Sliceless in Seattle”