I brace myself.  First, Marnie, one of Emma’s friends from middle school and high school.  Then Allie, a friend since first grade  Must remind myself to call her Alex.  I haven’t seen her in years. She looks happy, though uncomfortable in the spotlight, as usual.  I hope we get to talk to her.

Tears well in my eyes.  I expected tears, but not at this moment.

The preliminary parade concludes with a pair that I don’t know, the bride’s step sister alongside the groom’s college friend or childhood friend. I’ll find out later, I imagine.

Now the congregation rises, the organ music crests, and the bride appears, radiant, another of Emma’s old friends, now so much more an adult than when we knew her better, when she was part of the giggling gaggle. The show-tune-singing teens hanging out on our patio.  On the bride’s right is one of our ministers, her stepfather.  On her left, her mother, the other minister in our church.

Today, they will officiate at the wedding of their daughter and her husband-to-be. It must be surreal this merging of work, calling, and family in such a joyous way.

I can use that same word as I watch the ceremony unfold, as I see our ministers standing and speaking at the pulpit, holding back tears.  I watch through a liquid lens, and my mind journeys back 13 years to those same two faces, those same two voices as they held back tears of a different sort, helping us celebrate a too-short life.  Our Emma’s.

And I somehow feel both at once.

My cousin Amy was driving, and my mom was riding shotgun.  Sitting in the backseat with my sister was something I probably hadn’t experienced in at least 40 years.  We didn’t fight.

We drove for about two hours, through small towns, on the backroads that Apple Maps likes so much.  We passed the picturesque and the honky-tonk, gorgeous views of Long Lake and an ice cream shack named Custard’s Last Stand.  I wondered if you could get a Little Big Cone, but we didn’t stop. 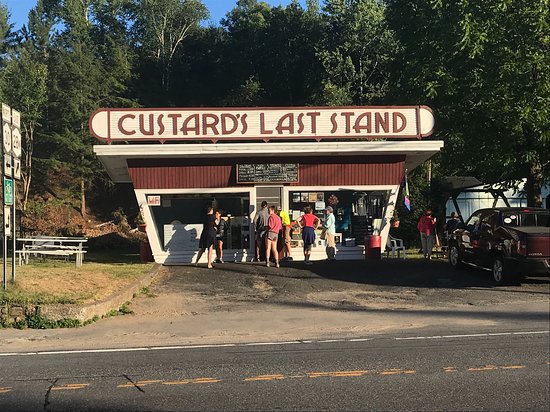 We had another reason for this expedition.

In 1955, my parents had honeymooned on Blue Mountain Lake.  They weren’t just tourists, though.   They stayed in the cottage next to the big house that my great grandparents owned on the lake.  My mom and her brother had spent every summer there when they were growing up.  Their parents would spend some of the time there, but mostly they stayed in the city.  It was grandparent time.  They canoed and swam, wandered the woods, played tennis, and breathed the Adirondack air.

I’ve grown up hearing stories about Blue Mountain, always accompanied by a sigh from my mom.  The house burned down a year after my parents’ honeymoon, and my great grandparents never rebuilt.  They sold the land and never came back.

Now my mom is 92.  This year my nephew bought a house in another part of the Adirondacks.  We were able to lure my mom up from Maryland, even though it meant many hours in the car.  At first, she declined, saying she wasn’t mobile enough to do any hiking on the uneven terrain of the region.  We tempted her, though, with the promise of a screen porch, mountain views, and time with my nephew’s 18-month-old son, her first great grandchild. It worked.

We’d been there a few days when the prospect of a trek to Blue Mountain was broached.  At first I wasn’t sure, and neither was my mom.  The house was gone.  We didn’t really know what we’d be aiming to see, but my cousin persisted.  Her father (my mom’s brother) had visited some years before, stayed at a lodge on the lake, and proclaimed it a most satisfying trip.  My mom scoffed at the lodge idea, noting that in their day, that lodge didn’t even allow Jewish visitors.  We guessed that time had corrected that, but we certainly didn’t push an overnight visit.  Finally my mom relented.

As we got closer to the town, I remained unsure about the visit.  It wasn’t much of a town (sorry, Blue Mountain Lake Chamber of Commerce), and there wasn’t a beautiful old house with that wraparound porch.  Or the dock or the grandfather clock.  We rolled through the main part of town and hung a right onto a small private road.  “Of course this road wasn’t here back then,” my mom said.

I had hoped this road would bend around the western end of the lake and curve toward the northern shore, where the old house had been.  Unfortunately, the little road became significantly more private before that, and we decided it wasn’t worth it to trespass.   I was a bit disappointed, but Amy pulled over, and we all spilled out.  “Oh, this is where the big lake meets Eagle Lake,” my mom said, pointing to the smaller body of water to our left.  We used to carry our canoes over this part right here and canoe on Eagle Lake.”   Then, moving slowly behind her walker, she shifted her gaze to Blue Mountain Lake.  She pointed again.  “Ooh.  Those three little islands were right across from our house.  We used to swim out to them.”  Then she pointed further up that northern shore.  “And that part up there, sticking out, that’s Popple Point.  Michael used to swim up to that.  I think I did once, at least.  That was a pretty long swim.”  She paused and inhaled.  She closed her eyes.  “Mmm.  I love that smell.”

I began to see the fault in my doubts.  I had assumed that with nothing left of the house, there would be nothing for us to see.  I had imagined a let down.  What I didn’t realize was that my mom could see it all.  It didn’t matter that we didn’t reach the site of the old house.  There probably would have been some mansion in its place anyway, confounding the memories.  This was better, just the lake, the islands, the trees, the smell, and the images in her mind.

As she looked out over the ruffled surface of the lake, Mom didn’t look sad at all.  She was seeing into her past…clearly.